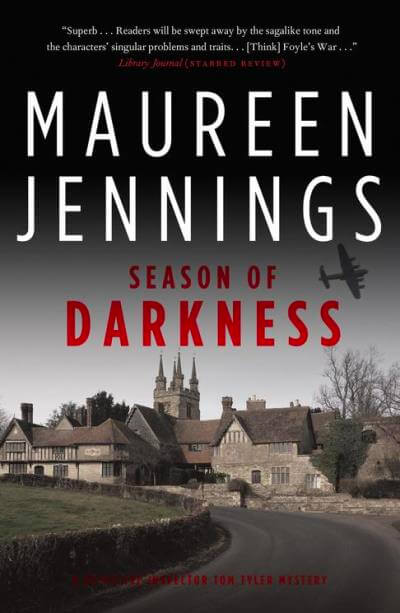 In 1940, England is desperate and fearful. The threat of a German invasion is real, and many German Nationals are interned in camps across the country. One such is on Prees Heath, near the small town of Whitchurch in Shropshire, where Tom Tyler is the sole detective inspector.

When a young women is found murdered on a desolate country road, Tyler — who has no shortage of troubles of his own — finds himself drawn into an uneasy alliance with one of the Prees Heath internees, a psychiatrist, who claims to be an expert on the criminal mind.

“Jennings has always had a keen eye for the marginalized members of society. . . . As the only police inspector in his insular Shropshire village, Tom Tyler . . . finds himself torn between loyalty to his neighbors and his sense of duty – a conflict that could easily take a Tom Tyler series through the end of the war.”
—New York Time Book Review

“Master storyteller and screenwriter Jennings . . . launches a trilogy with this superb entry. Readers will be swept away by the sagalike tone and the characters’ singular problems and traits. Think the British television series Foyle’s War for comparison.”
—Library Journal (starred review)

“A fine mystery. . . . [Tyler] has a vulnerable side that makes him a character whom readers will want to know better as this series continues.”
—Halifax Chronicle-Herald

“Jennings’s portrait of a society under threat . . . is engrossing.”
—Globe and Mail

“Tyler . . . is just as complex and appealing as Murdoch. . . . [Season of Darkness] stacks up well against other fine and compelling literature set during the Second World War.”
—Joan Barfoot, London Free Press