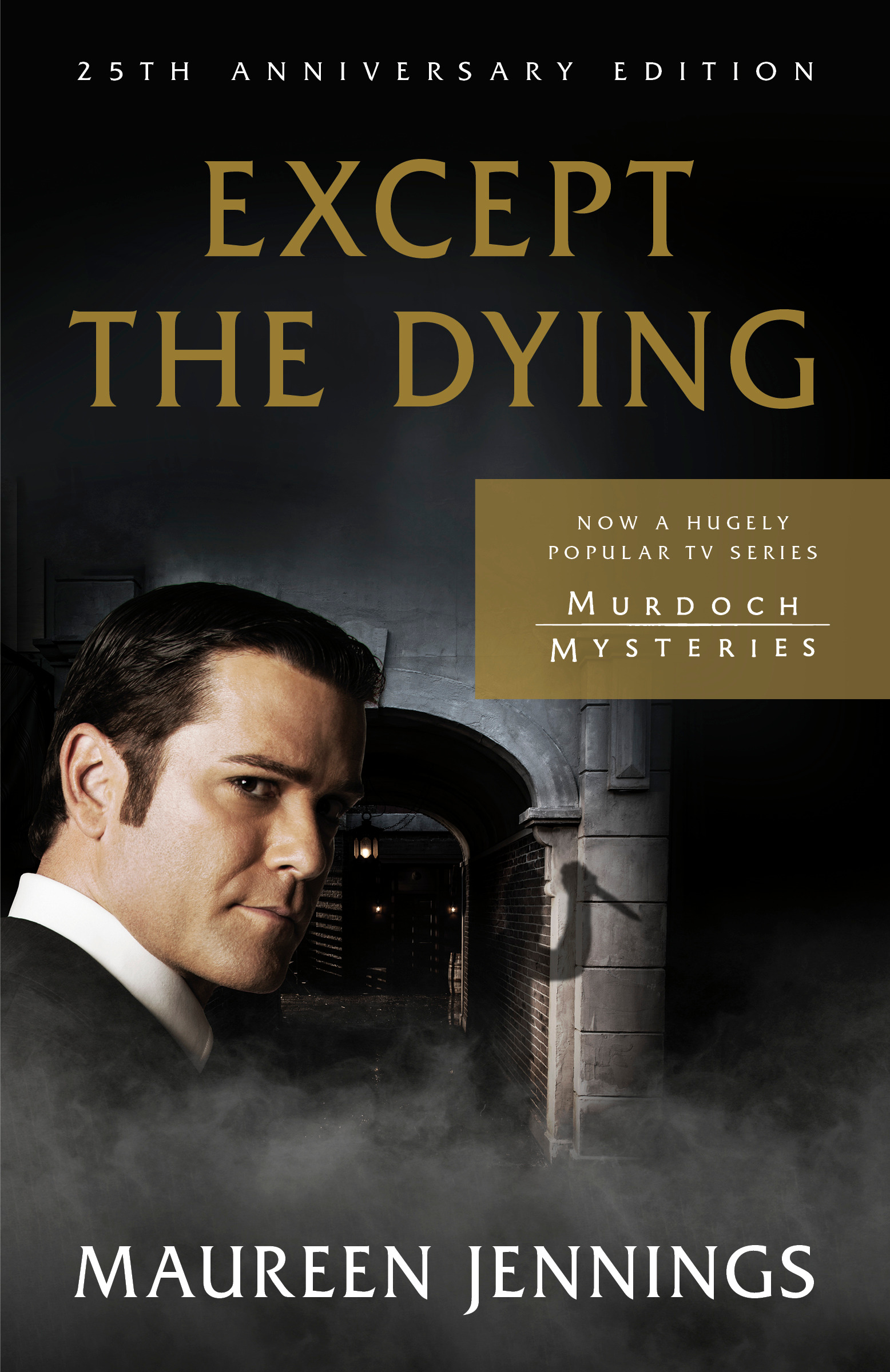 In the cold Toronto winter of 1895, the unclad body of a young woman is found naked and frozen in a quiet laneway. Acting Detective William Murdoch, driven by pity for the girl and the desire to secure his promotion, is determined to pursue every lead and reveal the truth. Although influential people pressure the police to solve the mystery quickly, when the girl is eventually identified, it becomes clear that those connected with her life have secrets to hide.

Murdoch must use every detective skill he possesses as well as his understanding of human nature as he pursues the mystery through both brothels and drawing rooms, desperate to untangle the case before more lives are lost.

“On a perishing cold winter’s day in 1895, the naked, abused body of a young housemaid is discovered frozen to the ground in a squalid back alley of Toronto. Maureen Jennings makes a tender moment of this stark scene in EXCEPT THE DYING (Thomas Dunne/St. Martin’s, $23.95), a first novel enriched by the vividness of its period settings and animated by the lifelike characters caught up in its broad social sweep.

The newsboys on their street corners, the prostitutes in their filthy beds, the widows at their craft work, the courting couples on their skating ponds, the rich men at their clubs — Jennings has a wonderful feel for the places and tasks that give life and context to a character. She also understands the barriers of economics, class and religion that imprison people in their separate niches.

By virtue of his sympathetic nature, Detective William Murdoch slips easily through all these worlds, unafraid to shake them to their foundations in his search for the person who is using and discarding women with such contempt. In private, Murdoch mourns the fiancée who died young (”gone as quickly as a shadow on the lawn”) and silently practices his waltz steps on the bare floor of an empty room. Although he solves his case in a fairly conventional way, there’s more to Murdoch than his genre traits, and his warm heart makes him the right sleuth for this cold city.”
– New York Times

“Turn-of-the-century Toronto makes an evocative setting for murder in Except the Dying, a skillful first novel that is interesting both for its historical accuracy and its fully realized characters. The plot concerns the murder of a young housemaid, discovered naked in a snowy lane, and the cast of suspects spans the social strata. Yet it is William Murdoch, the detective in charge of the case, who breathes life into what might otherwise have been a conventional murder mystery. As he pursues his quest for justice, Murdoch also mourns the death of his fiancée; his manner of doing both reveals a compassionate, principled man–one whose fictional endeavors (readers hope) have only just begun.”
– Amazon.com

“First novelist Jennings, herself a British transplant to Canada, provides a provocative look at a wealthy, turn-of-the-century British family living in Toronto. Acting detective William Murdoch handles a case that exposes not only the dysfunctional nature of the Rhodes family, whose young French-Canadian maid has been discovered dead, drugged, and pregnant in the snow, but also the peculiarities of a class-conscious society. Murdoch investigates and then spars with bigoted higher-ups until he uncovers the murderer. A finely flavored plot, credible characters, and detailed atmosphere make this a winner.”
– Library Journal