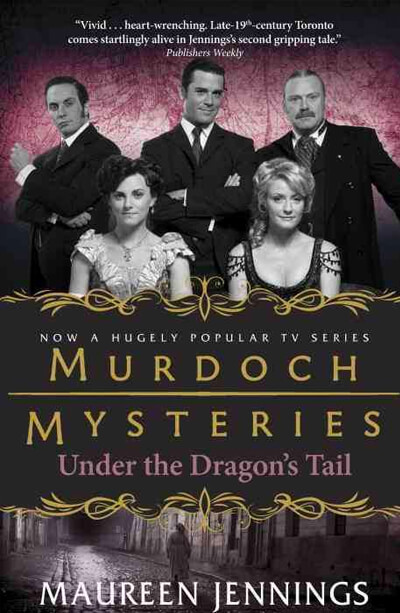 Women rich and poor come to her, desperate and in dire need of help – and discretion. Dolly Merishaw is a midwife and an abortionist in Victorian Toronto, but although she keeps quiet about her clients’ condition, her contempt for them and her greed leaves every one of them resentful and angry. So it comes as no surprise to Detective William Murdoch when this malicious woman is murdered. What is a shock, though, is that a week later a young boy is found dead in Dolly’s squalid kitchen. Now, Murdoch isn’t sure if he’s hunting one murderer – or two.

“Life in Toronto in 1895 was no glide across the ice, according to Maureen Jennings in her horridly graphic period mystery UNDER THE DRAGON’S TAIL (Thomas Dunne/St. Martin’s, $21.95). Even the high and mighty were plagued by syphilis, birth defects and loathsome skin conditions, and the lower classes were also malnourished and crawling with worms, while any woman, rich or poor, who needed an abortion or had to give up a child for adoption was at the mercy of her midwife. When Dolly Merishaw, an unsavory specimen of the profession, is smothered on her own hearth, the police dispatch William Murdoch to determine which of Dolly’s shameful deeds drove one of her clients to murder. Despite certain plot transparencies, the grim story is told in forthright detail and put in a social context that elicits real sympathy for characters bound by class and biology.”
– The New York Times

“Maureen Jennings sets up this 19th-century tale of blackmail and murder rather like a jigsaw puzzle: each chapter introduces new clues, new characters, and new points of view until the complete picture is revealed. As we discover who might have suffocated Dolly Shaw, a capricious, demanding drunkard, Jennings explores the permutations and stratifications of society in Toronto at the close of the century. Although the victim is a violent, scheming wretch of humble dwelling and few connections, her death draws in the range of men and women who employed her services in her profession as a midwife: the wife of a prominent judge who seems to care for little except fashionable clothes and her young ward; a theatrical performer who sells her various talents both before and behind the stage; and the detective, William Murdoch, who tries to solve the mystery and appease his own loneliness after the death of his fiancée.”

“Jennings has a subtle touch. She not only explores Canadian society caught between the stiffer British and the more freewheeling Americans but also considers the period’s reliance on patent medicines for everything from inducing miscarriages to promoting virility; examines the shifting athletic interests after the introduction of the bicycle; and evokes the stink of stale beer sold cheaply to the city’s poor. Her ear for 19th-century language is more true and her evil deeds are less foul than those of Anne Perry. And while she lacks the rollicking good humor of Elizabeth Peters (although there are a few light moments), she is much more accessible than the sometimes impermeable Peter Ackroyd. Under the Dragon’s Tail is a worthwhile book and a solid follow-up to Jennings’s first, Except the Dying.”
– Amazon.com

“Life in late-19th-century Toronto comes startlingly alive in Jennings’s second gripping tale, after Except the Dying, 1997. Acting-detective William Murdoch investigates the murder of former midwife Dolly Shaw, the foster mother of three children. Her deaf daughter runs from the police and hides while the two young sons stay at the house and fend for themselves. Dolly’s meager effects turn up the calling card of a prominent judge’s wife and a note that suggests she had been blackmailing someone. Murdoch learns that a young stage performer, Annie Brogan, was seen entering Dolly’s house on the night of the murder and that Annie’s sister is pregnant by the judge’s footman. Annie finally admits she visited Dolly for abortion herbs and that she stole an autograph album in which Dolly recorded information about the illegitimate births she attended. The judge’s wife, who is guardian of the child of her dead cousin, denies knowing Dolly. When Dolly’s older son is murdered, Murdoch continues his search for the killer in both upper-crust society and the world of the popular stage. At the same time, he trains on his bicycle for the city-wide police tournament and ruminates on his solitary life. Along the way readers are given a vivid, heart-wrenching picture of the poverty of many in Victorian Toronto.”
– Publishers Weekly