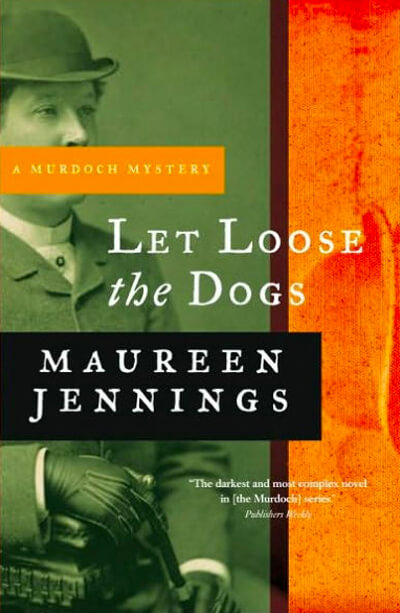 In Let Loose the Dogs, Murdoch’s life and work overlap tragically. His sister, who long ago fled to a convent to escape their abusive father, is on her deathbed. Meanwhile, Harry Murdoch, the father whom Murdoch long ago shut out of his life, has been charged with murder and calls on his estranged son to prove his innocence. But, knowing his father, what is Murdoch to believe?

“Ah, the romance of historical fiction! Gas lamps spill their soft light on cobblestone streets as jolly coachmen deposit travelers at snow-covered inns where suckling pigs roast above blazing hearths. Oops — wrong book. You’ll never find a scene like that in Maureen Jennings’s late-Victorian mysteries featuring William Murdoch, a good-hearted but perpetually mournful detective with the Toronto police force. Life is harsh, men are brutal, and everyone dies young in this unsentimental series, which thrives on its realistic treatment of subjects like the bloody rat-killing match that opens LET LOOSE THE DOGS (Thomas Dunne/St. Martin’s Minotaur, $24.95).

“Nature can teach us our lessons if only we want to learn them,” says the landlord of the tavern where one of these dog-versus-rat encounters ends in a murder for which Murdoch’s father will soon hang. Although no naturalist, Murdoch pays heed to this advice when he visits households in which mental illness, child abuse, rape and cruelty to wives and animals are commonplace. And the lesson he takes away with him — the helpless ones are destroyed” — is no more comforting than the recognition of his own raging anger against his violent father. Murdoch will do his duty by this old degenerate, but it will cost him. Jennings is too tough and honest a writer to let anyone off her moral hook, even her hero.”
– The New York Times

“Acting Detective William Murdoch, of Toronto’s Number Four Station, must try to clear his own father of a murder change as the execution date draws near in Let Loose the Dogs, the fourth and perhaps darkest and most complex novel in this well-received Victorian series by Canadian author Maureen Jennings (Poor Tom Is Cold, etc.). Murdoch is understandably ambivalent, given that he and his sister Susanna, recently deceased in a nunnery, fled their violent, alcoholic father 22 years earlier.”
– Publishers Weekly