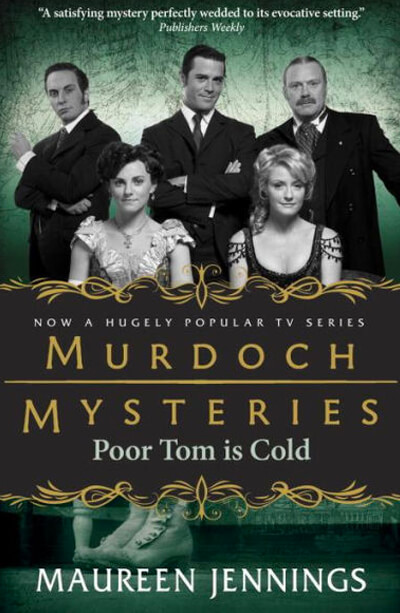 In this third adventure featuring the lovable detective William Murdoch, he becomes involved with the apparent suicide of Constable Oliver Wicken – a man who was the sole support of his mother and invalid sister.

But further investigation by Detective Murdoch takes him far afield and he begins to suspect that the Eakin family, whose house adjoins the one where Wicken died, is more involved with the case than they admit.

Whether describing a tooth extraction, the unquestioning prejudice toward the few Chinese immigrants in the city, or the well-intentioned, but bizarre, treatment of mentally ill women, Maureen Jennings once again brings the period vividly to life.

“It was an inhospitable period, as well, for a woman like Peg Eakin, who, in Maureen Jennings’s socially perceptive mystery POOR TOM IS COLD (Thomas Dunne/St. Martin’s Minotaur, $23.95), is consigned to a madhouse by scheming stepchildren with greedy designs on their father’s inheritance. William Murdoch, the principled police officer who carries the era’s badge of honor in this astute series, can’t wipe out the social injustices that make him heartsick; but his pragmatic heroics are good enough for Peg, whose plight comes to his attention during an investigation into the staged ‘’suicide” of a murdered constable. As Murdoch goes from house to house, poking into the lives of both working and privileged classes, Jennings always manages to guide him to the trenchant detail that brings big issues down to eye level.”
-The New York Times

“The plethora of historical mysteries makes it difficult for a writer to carve out a time and place uniquely her own. However, Jennings has laid strong claim to the Toronto of the late 19th-century with the Anthony award-winning Except the Dying and Under the Dragon’s Tail, and she cements her hold with this deft combination of mystery and social issues. Now an acting detective, William Murdoch faces heartache and toothache as well as the troublesome (apparent) suicide of a young constable, Oliver Wicken. The constable’s body is found in an abandoned house on his patrol route when his supervisor reports his absence. A note by the body suggests Wicken killed himself over a lover’s rejection. A witness even comes forward to claim she was the woman involved.”

“Murdoch’s investigation is driven as much by the desire of the police to avoid the stigma of a suicide in its ranks as it is by a desire to expose a crime. Jennings exposes the era’s “political correctness” without ever mounting a soapbox or becoming strident. So many incidentals of her book fascinate, horrify or inform: the treatment of those consigned to the “insane asylum”; the prevailing prejudice against Chinese and Catholics; the new, “painless” dentistry then available. The result is a satisfying mystery perfectly wedded to its evocative setting. Jennings’s sales and reputation should continue to grow with this third strong effort.”
– Teresa Chris, Publishers Weekly, Copyright 2000 Reed Business Information, Inc.

“Turn-of-the-19th-century Toronto springs to life in this affecting series (Under the Dragon’s Tail) from Jennings. Acting detective William Murdoch refuses to believe the findings of a coroner’s jury that the violent death of a young, sensible constable was suicide. Oddly enough, at least one jury member has a dirty secret: he and his siblings will do anything to prevent their aging father’s current young wife from inheriting his money. Contemporary social, religious, and sexual mores frame a strong plot line and delineate a resourceful “hero.” Highly recommended.”
– Library Journal