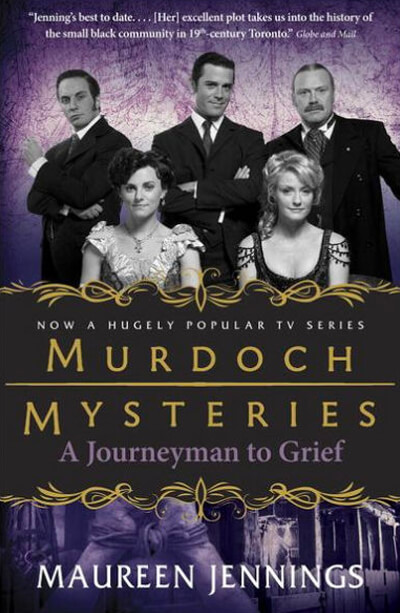 The abduction of a young woman in 1858 ends in Toronto thirty-eight years later — in murder.

In 1858, a young woman on her honeymoon is forcibly abducted and taken across the border from Canada and sold into slavery. Thirty-eight years later, Detective Murdoch is working on a murder case that will take all of his resourcefulness to solve. The owner of one of Toronto’s livery stables has been found dead. He has been horsewhipped and left hanging from his wrists in his tack room, and his wife claims that a considerable sum of money has been stolen. Then a second man is also murdered, his body strangely tied as if he were a rebellious slave. Murdoch has to find out whether Toronto’s small “coloured” community has a vicious murderer in its midst — an investigation that puts his own life in danger.

Maureen Jennings’s trademark in her popular and acclaimed Detective Murdoch series is to reveal a long-forgotten facet about life in the city that dispels any notion that it really ever was “Toronto the Good.” As well, in A Journeyman to Grief, an exceptionally well plotted and engrossing story, she shows just how a great harm committed in the past can erupt fatally in the present.

“A Journeyman to Grief is Maureen Jennings’ seventh Detective Murdoch mystery, and each has been as good as, or better than, the last. Within a few pages of her new novel we are so firmly and happily ensconced in the late-19th-century world she has created that modern contrivances such as computers and jet airplanes seem as far-off and fanciful to us as they would be to her characters.

An interrupted 19th-century honeymoon …
… ends 38 years later in a violent outburst.Niagara Falls, 1858. A young bride named Lena is abducted from her husband and sold into slavery. She ends up at the Toronto home of Catherine Dickie, whose son and daughter-in-law, Leigh and Caddie, beat her unmercifully for the slightest infraction. Flash forward to 1896, when William Murdoch, the dogged cop who’s finally made full detective at Toronto’s number four station, is led to the corpse of Daniel Cooke, who’s been strung up in his own livery stable and whipped “between 37 and 39 times,” according to medical examiner Dr. Julia Ogden and her curiously off-putting acquaintance Prof. Marc Broske, a lecturer on the physiology of fear. It’s obvious to the reader, if not at first to Murdoch, that the second crime in some way echoes and avenges the first, but what exactly is the connection? Jennings’s tour of fin-de-si’cle Toronto—a grim city whose denizens include dry-eyed widows, dyspeptic cabbies and directors of alcoholism clinics all as brutal as the bare-knuckles boxing matches that flourish just outside the city fathers’ purview—is by turns bracing and chilling.A surprisingly tender tale of slavery, addiction, violence and revenge served ice-cold
Kirkus Reviews

“This novel begins in 1858, when a young woman on her honeymoon in Niagara Falls is kidnapped and sold into slavery in the U.S., but most of the action takes place in Toronto 38 years later. That’s when the owner of a livery stable is strung up and whipped to death.

“Murdoch needs to establish not only who would want the man dead but who would feel such hate for him as to keep whipping him after he died. And then the elderly, relatively affluent black man who works part-time at the stable is found dead, shot and tied up.

“During the first half of the novel Jennings offers us occasional glimpses of the unhappy life of the young woman from Toronto who was sold into slavery. There is, of course, a connection between this crime of the past and the ones Murdoch is trying to solve in 1896. Though that connection becomes obvious to the reader well before Murdoch wraps things up, there’s still a twist or two waiting at the end.

“Fans of this series will be pleased to see that Murdoch’s personal life has stabilized – he is probably the happiest here that he has ever been. First-time readers can enjoy this as a standalone novel, and will have the additional pleasure of knowing there are six more Detective Murdoch novels waiting to be read.”
– Jeff George, Quill and Quire; May 2007