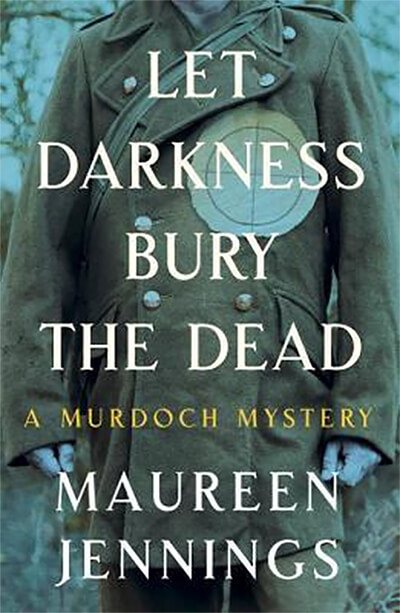 It is November 1917. The Great War is grinding on, chewing up young men by the thousands. Initially, in the loyal Dominion of Canada, people are mostly eager to support the Motherland and fight for the Empire. Men perceived as slackers or cowards are shunned. But the carnage is horrendous and with enforced conscription, the enthusiasm for war is dimming.

William Murdoch is a widower, a senior detective who, thanks to the new temperance laws, spends his time tracking down bootleggers and tipplers; most unsatisfying. His wife, Amy, died giving birth to their second child, a girl who lived only a few hours more. Murdoch, racked by grief, withdrew from four-year-old, Jack. This he regrets and would dearly love to make up for his negligence.

As we enter the story, Jack, now twenty-one, has returned from France after being wounded and gassed on the Western Front. It is soon apparent that he is deeply troubled but he’s not confiding in his father. He does, however, seem to be bound by shared secrets to another wounded former soldier, Percy McKinnon.

Murdoch suddenly has much more serious crimes than rum-running on his hands. The night after Jack and McKinnon arrive home, a young man is found murdered to death in the impoverished area of Toronto known as the Ward. Soon after, Murdoch has to deal with a tragic suicide, also a young man. Two more attacks follow in quick succession.

Increasingly worried that Jack knows more than he is letting on, Murdoch must solve these crimes before more innocents lose their lives.