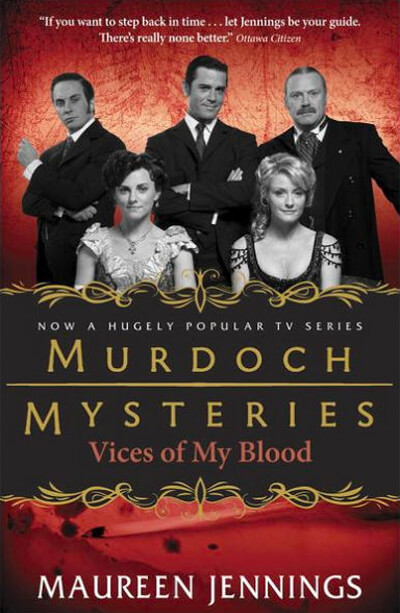 In his forties, the Reverend Charles Howard still cut an impressive figure. A married Presbyterian minister in Toronto’s east end, Howard was popular with the congregation that elected him, especially with the ladies, and most particularly with Miss Sarah Dignam.

Respected in the community, Howard, as Visitor for the House of Industry, sat in judgment on the poor, assessing their applications for the workhouse. But now Howard is dead, stabbed and brutally beaten by someone he invited into his office. His watch and boots are missing. Has some poor beggar he turned down taken his vengeance?

Murdoch’s investigation takes him into the arcane Victorian world of queer plungers — men who fake injury all the better to beg — and the destitute who had nowhere left to turn when they knocked on the Reverend Howard’s door.

“Maureen Jennings’ new novel, Vices of My Blood, picks up where her previous William Murdoch mystery left off. Only two months have passed since the end of Night’s Child, when Murdoch’s lover, Enid Jones, left Victorian Toronto and moved back to Wales to be with her ailing father. Murdoch has received his expected promotion to detective and is settling into his new living arrangements.

“The story begins with the Toronto police being warned about the imminent arrival of a group of “queer plungers” (small-time con artists) when they receive news of the murder of the Reverend Charles Howard. Murdoch takes the call and finds Howard in his office at Chalmers Presbyterian Church. He’s been kicked in the head and stabbed in the neck with a letter opener. His boots have been taken and it appears that his pocket watch has been stolen.

“The simple explanation of a robbery gone terribly wrong is accepted by many, but there are enough inconsistencies to keep Murdoch investigating. The boots are eventually found on the feet of one of the queer plungers, and his story leads Murdoch to go undercover to live as a vagrant. Meanwhile, another poor family falls victim to the murderer as he tries to cover his tracks.

Jennings immerses her readers in the Toronto of the 1890s. The smells, sights, and sounds she describes ring as true as if she were recounting a trip she’d made there last week. She weaves a tight plot and once again does a fine job contrasting the lives of those in the church and others of “respectable” society with the many who have nothing more than the clothes upon their back. Poverty or wealth or station in life, however, have little to do with strength of character – as Murdoch discovers when he finally tracks down the reverend’s murderer.”
-Jeff George, Quill & Quire

“Its only rivals are the other entries in the series… Mystery lovers can be assured that the culprit is plausible, the clues fair, the tea strong and the pace brisk… Murdoch’s Toronto gets convincingly up your nose and under your fingernails.”
– Globe and Mail

“Jennings opens a window on the realities of a late-Victorian city… There wasn’t a whole lot of magic to be found in those times – unlike in Jennings’ writing… If you want to step back in time… let Jennings be your guide. There’s really none better.”
– The Ottawa Citizen

“Jennings breathes life into her setting… A highly readable novel. Not just a historical Canadian mystery, this is Canadian fiction of the utmost calibre.”
– Brandon Sun

“Jennings… is not only a lively plotter and smooth writer, but a meticulous researcher of Toronto, and life there, at the turn of the 20th century.”
– The London Free Press (Ontario)

“Another exciting, historically accurate story about the difficult and often dangerous poverty in urban Victorian society…. Jennings superbly paints the reality of turn-of-the-century Toronto… It’s an historical mystery full of passion about the seedy abuses of Victorian society. I couldn’t put it down.”
– The Hamilton Spectator (Ontario)

“The book is rich in memorable characters… these people jump off the page. This is a fine read.”
– Star Phoenix (Saskatoon, SK)

“Jennings writes in a sprightly fashion and keeps the plot moving smartly forward… The down and out stuff is fascinating.”
– Winnipeg Free Press