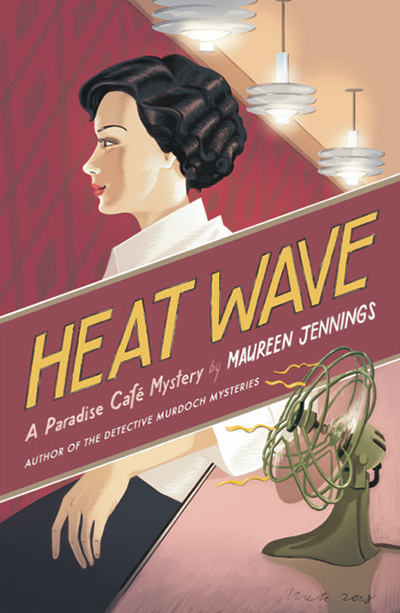 It’s July 1936 and Toronto is under a record-breaking heat wave. Charlotte Frayne is the junior associate in a two-person private investigation firm, owned by T. Gilmore. Two events set the book’s plot in motion: an anti-Semitic hate letter is delivered to Gilmore, who up to now has not acknowledged his religion, and Hilliard Taylor, a veteran of the First World War requests the firm’s assistance in uncovering what he believes is systematic embezzlement of the Paradise Café, which he owns and operates with three other men, all of whom were prisoners of war. The two events, although seemingly completely unrelated, come together in this wonderful novel that brings to life characters who are as real to the reader as those of the Detective Murdoch series.

Maureen Jennings is the author of the beloved Murdoch mystery books, which have sold hundreds of thousands of copies in Canada, the U.S., and the U.K. The first books in the series were made into films for television. Soon after, Murdoch Mysteries began in 2008 and is still running today. In addition to the Murdoch mysteries, she has published, five of which have been nominated for the Arthur Ellis Award. Her books have also been nominated for the Anthony Historical Mystery Award, the Macavity/Sue Feder Historical Mystery Award, the Barry Award, and the Bruce Alexander Award. She received the Heritage Toronto Certificate of Commendation.

Maureen has also published two Christine Morris books, Does Your Mother Know? and The K Handshape, which was nominated for the Arthur Ellis Award. She has also published three Tom Tyler books, Season of Darkness, Beware This Boy, No Known Grave, and Dead Ground In-Between.