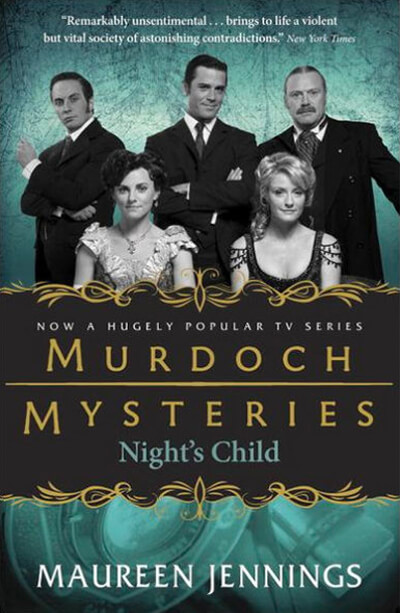 After thirteen-year-old Agnes Fisher faints at school, her teacher, the young and still idealistic Amy Slade, is shocked to discover in the girl’s desk two stereoscopic photographs. One is of a dead baby in its cradle, and on the back Agnes has scrawled a terrible message. Worse, the other photograph is of Agnes in a pose captioned “What Mr. Newly Wed Really Wants.”

When Agnes doesn’t show up at school the next day, her teacher takes the two photographs to the police. Murdoch, furious at the sexual exploitation of such a young girl, resolves to find the photographer – and to put him behind bars.

“Poverty, starvation, disease and the vicious abuse of the weak and helpless — William Murdoch, the sympathetic Toronto police officer in Maureen Jennings’s late-Victorian mysteries, has seen the suffering and wept for it all.

In NIGHT’S CHILD (McClelland & Stewart, paper, $18.95), the fifth novel in this remarkably unsentimental series, the humane detective is shaken by yet another social abomination: the exploitation of children in the underground pornography trade.

Murdoch is made aware of the matter by Amy Slade, a teacher at an elementary school where children show up, if they show up at all, tired, hungry, sick and covered with bruises. A so-called New Woman, who dresses in ”odd but practical trousers,” Miss Slade has discovered salacious photos of one of her pupils, the 13-year-old Agnes Fisher, who is now missing.

While well-observed characters like Miss Slade lend humanity to the melodramatic events, realistic scenes set in private homes (where grieving families lay out their dead for portrait artists) and public places (like the Mechanics Institute, where Murdoch’s current lady friend competes in a World Typewriting Competition) bring to life a violent but vital society of astonishing contradictions.”
— New York Times Book Review

“Jennings once again takes readers to the dark side of Victorian Toronto… The portrayal of Victorian life in Toronto rings true. We feel the chill of the poorly heated rooms and sympathize with all those at the margins of society… This is a well-written, tightly plotted mystery.”

“Jennings has… shed more light on the issue of child pornography… By showing us something of this activity in what we may have assumed was a more innocent time… Jennings has made new the horror of this crime.”
— Quill & Quire

“Jennings has… a fine eye for telling details and good characters… Jennings handles all the plotlines with aplomb, while never losing her grounding in Toronto history.”
– Globe and Mail