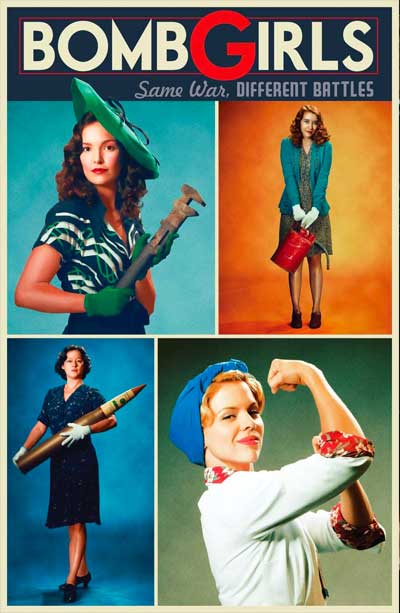 Set in the 1940s, Bomb Girls is a Canadian television drama that debuted on January 4, 2012 on Global.

The plot profiles the stories of four women working in a Canadian munitions factory during World War II, beginning in 1941 and tells the remarkable stories of the women who risked their lives in a munitions factory building bombs for the Allied forces fighting on the European front. The series delves into the lives of these exceptional women from all walks of life – peers, friends and rivals – who find themselves thrust into new worlds and changed profoundly as they are liberated from their home and social restrictions.

The concept was sold to Back Alley Film Productions (Adrienne Mitchell and Janis Lundman) in 2010 who subsequently created the formal pitch to potential broadcasters which resulted in a sale the pitch to the Global Television network in Canada. Following the success of season one. Both ITV 3 in the UK and REELZ tv in the US broadcast the series as well.

Bomb Girls has had a total of two seasons comprising of 18 episodes, and in 2013, Muse Entertainment and Back Alley Film Productions produced a 2 hour movie of the week for Global Television scheduled to air early in 2014

Season one was nominated for a number of Canadian Screen Awards and also received the Gracie Award in the US for best dramatic TV series for 2012.